So I had to pick up a playhouse for my daughter yesterday and I since I am such a dedicated Costco Fan, decided I would make a pilgrimage to Costco Warehouse #001.  The location of the first Costco Warehouse in a big industrial area in the south of Seattle, about 5 minutes off the highway.  This Costco is located on 4401 4th Avenue South, Seattle, Washington. 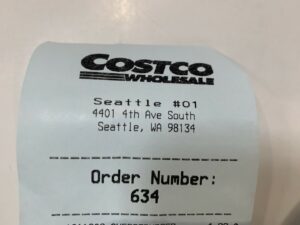 I didn’t have too long to spend inside the store, but one thing that you do notice is that it is a BIG Costco.  It is pretty fun store to walk around and there are MANY more items that you would find in your normal Costco.  If you wanted to try the infamous Costco Double Cheeseburger, you can even order one here at the food Court!  If you want a top it off with a Fountain Drink, you can get one for $0.59!  The hamburger was pretty good actually, the bun was really fresh, the meat had a grilled flavour to it, and there was lettuce, cheese, chopped tomatoes and chopped onion.

I didn’t actually have time to take any pictures in store, the store was so big it was a little intimidating and I’m glad Costco stores in Canada aren’t that big.  Pictures in Canada is already quite a commitment.  Imagine a store twice as big as the average store!

For those of you who don’t know, I have a colleague, who takes pictures near Seattle and I wanted to make sure you guys head over to his blog before you head down to Bellingham.  He has been doing a great job of keeping everyone down there of all the great unadvertised deals and want to show him some support!!!

That is all I have for now!

CLICK HERE TO SEE the Costco Northwest Sale and flyer Items for August 12-18, 2019 for Washington, Oregon, Alaska, Idaho, and Montana